Wow! What a whirlwind. We started out on Monday at the Dublin Castle tour. We did cheat a little and get a cab into Dublin as we wanted to be at the Castle as close to 10am as possible. We got there just after 10, and went on the 10:15 am tour. It was a brief tour, however we got to see the different sections of one of the towers, including going underground to see some old entrances, and the different layers of the building from Viking times through to the British occupation. After this interesting section, we then ventured into the church attached to the castle. In here were plaques for all of the Lord Mayors (I think that is what they were called) and their coats of arms. It was very peaceful.

The church attached to the remaining original tower at Dublin Castle

The organ in the church – which no longer works 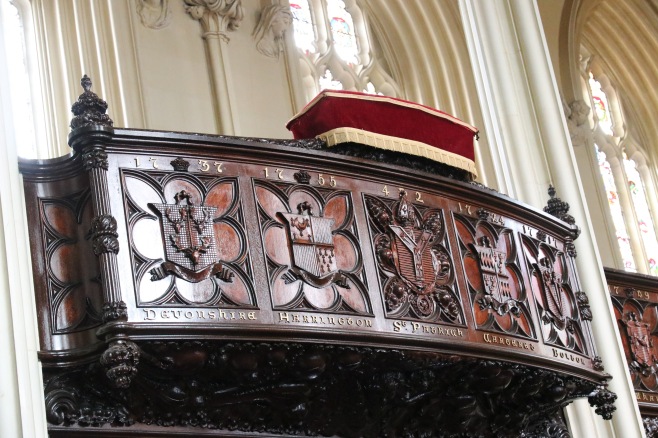 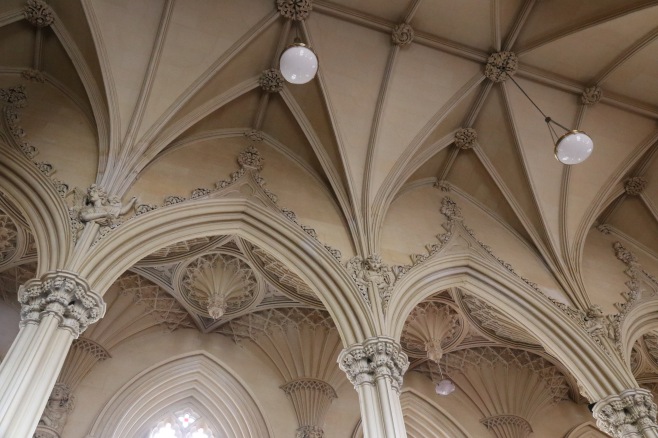 The detail on the ceiling of this church.

After the chapel we headed up into the ‘State Rooms’. Our tour guide explained that a castle was built for defence, whilst a palace was built for entertainment. We then were able to look through the rooms that are now used for ceremonial purposes. 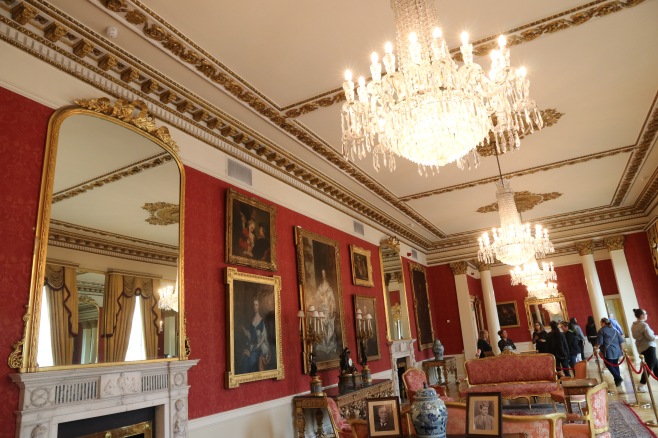 The drawing room in the State rooms

The dining room set for a banquet

The flags and ceiling in the ball room – now used for important ceremonial occasions.

At the conclusion of the tour, we had decided to go to the Guinness Storehouse Tour. Luckily for us, we walked out of the Castle, waited about 5 minutes and along came a Hop On Hop Off bus (which we still had our ticket for from yesterday) going express to the Guinness Storehouse! Winners! We got onto the bus and arrived there in no time. The Guinness tour was 25 Euros each – so one of the most expensive tours we did in Dublin. It was informative and also included a pint of Guinness at the end. It was self-directed and really explained the process of making beer. I found it interesting, although I’m not sure it was worth the price that is charged. I did actually taste it. They had a tasting room where you could taste an 1/8 of a pint, so I tried it. It wasn’t as bad as I had thought it would be, however I chose not to have a pint of it at the end. We ended up having our pints up in the Galaxy bar which has a 360 degreee panoramic view of Dublin. It was crowded, but enjoyable. Phil tried to book the Kilmanheim Gaol tickets from here as we had planned to go straight there, however they were sold out for today. We booked them for tomorrow instead.

At 10:00 am official tasters taste Guinness to make sure it meets their standards. Phil thinks that that could be a great job.

Phil enjoying his pint of Guinness in the Galaxy Bar.

Guinness getting trucked out around Dublin. 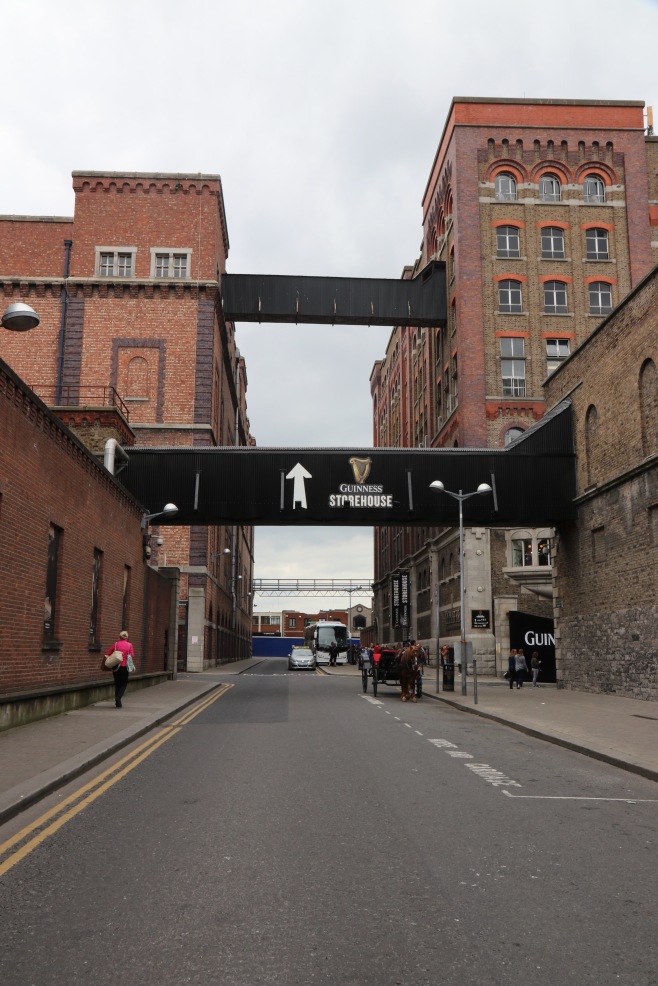 We decided to walk along the River Liffey and go to the walking tour included in our 48 hour ticket. We had a quick bite to eat on the way and met the tour guides at 3:00 pm. It turns out that it’s a free walking tour and you pay the guide in tips at the end, so it was free anyway! That being said, our tour guide was James and he was amazing. We were staying on the north side and were mainly looking at the history around the 1916 uprising so Phil was well chuffed – as this was exactly what he wanted to learn about.

Looking to the South side of Dublin across the River Liffey

A view of the Ha’Penny Bridge across the Liffey

The tour was the perfect combination of history and information about Dublin, from a Dubliner’s perspective. We really enjoyed this tour and especially James who made it all come to life for us. 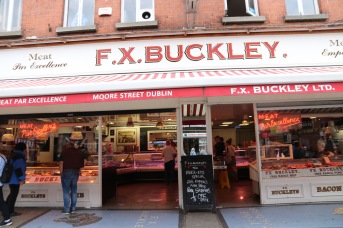 Butchers on Moore Street – a quant old street that had a real olde world feel to it.

Fruit stalls that have existed in this street for hundreds of years that used to be passed from mother to daughter.

The Spire, which also has many names, the most common one being the needle 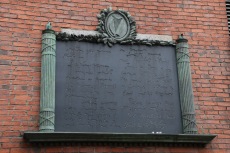 The last letter that a dying man involved in the 1916 uprising wrote to farewell his wife.

The garden of remembrance for all of those who died fighting in any conflict. 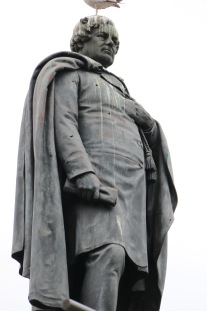 Part of the monument to O’Connell on O’Connell Street also showing the damage from bullets in the 1916 uprising. 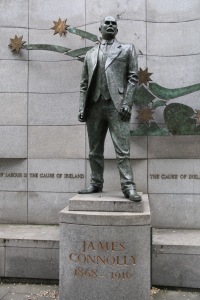 Monument to Connelly, one of the men involved in the 1916 uprising.

The tour continued past the Rotunda Hospital, the Garden of Remembrance, the spire, the Abbey Theatre and then at a monument to Connolly.

After the tour, we found a souvenir shop that seemed to have a lot of souvenirs that we were interested in, so we bought a t-shirt each and some other souvenirs. After all of this walking, we were exhausted, so we stopped for a drink on the way back to Megan and Paul’s. They weren’t going to be home until 7:30, so there was no rush. We stopped at Bailey’s Cafe and Bar. Phil had 2 Irish Coffee’s and I had a hot chocolate. It was just perfect.

When we got home, we then went out for dinner to one of Megan and Paul’s local restaurants. After a lovely dinner, we then went out to see some Tweedle dee music (as Megan calls it – essentially traditional Irish music). It was amazing. The entire atmosphere was something we had never experienced before. It was also the first time that we got to see the city in the dark, as the sun doesn’t set until after 10 pm. We headed home and were exhausted. When we checked our step counter, we had walked over 18 km! No wonder we were exhausted!

Some of the musicians who were playing and singing traditional Irish music at O’Donogue’s – the Irish pub.

We both slept well that night!