Today was a day of two towns. We had breakfast in our square, enjoying the beautiful Vernazza. We had some focaccia for breakfast with ham, cheese and tomato. It was delicious. Phil loved his cappucino too!

Phil in the square at breakfast We decided to head first to the biggest town Monterosso. This was the place that Phil wanted to stay. It is MUCH flatter than the other towns! It is also longer due to the flatter ground. It has a much more beach feel but very limited free beach space. All of the umbrellas that you see with sunbeds / deckchairs cost you to use for the day – from memory for 2 sunbeds and an umbrella it was about 30 Euros. That’s about $50 AUD. We stopped at a cafe to enjoy some morning tea – Diet Coke (of course for me although it’s called Coke Light here) and some strawberries and ice cream.

View of the beach and the umbrellas 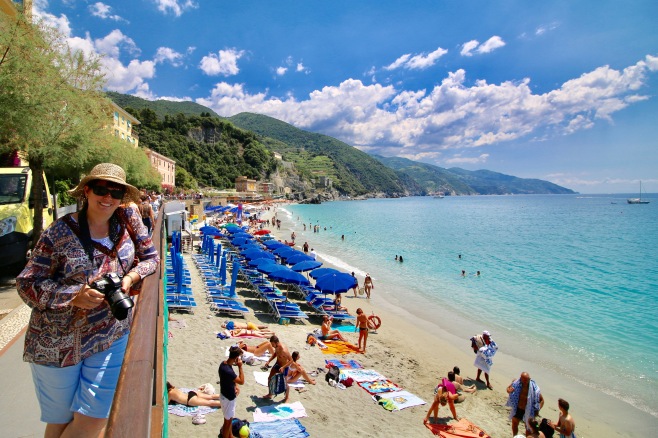 Another shot further along the coast

We could see how this would make a great beach holiday destination. We then headed up the hill and into the older section of the town. This was pretty with lots of alley ways. We explored around and took some photos. This was really pretty. Phil felt like a beer (it was 1:00 by this time) so we stopped at a restaurant in the old section of town, tucked away in an alleyway (that had lots of people there). Phil had a beer, I had a glass of Prosecco and we each had some bruschetta. We then explored Monterosso more.

Monterosso in the newer area We enquired about the ferry prices and have decided that we will definitely do that tomorrow. We saw a train go past and knew we had 30 minutes to get the next one so headed back towards the station. We went through the tunnel this time, rather than up and over the hill. We walked out and saw this view! 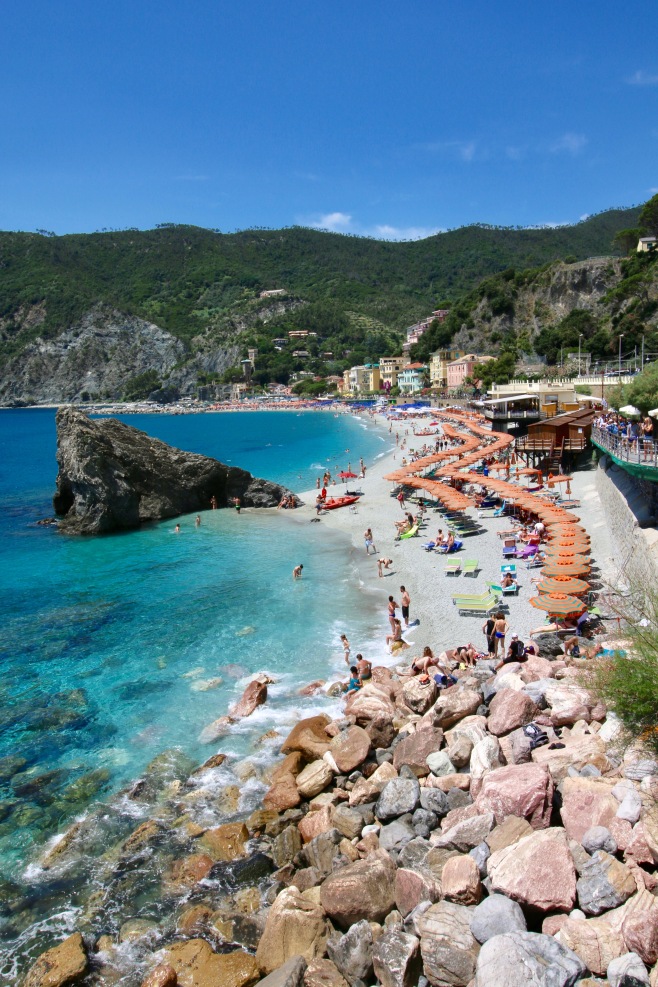 We walked to the station and got on the train bound for Manarola.

We arrived in this small village and couldn’t believe how much steeper it was. I’m glad we didn’t stay here. The Main Street was rather small and we headed down to the water. (The street was sloped that way too). We made it to the harbour and there were people jumping off this massive rock! The water was so clear and we could see the bottom. We were shocked! Then they jumped in and we realised that it was much deeper than it looked. The water here is so amazingly clear though. We hung around the harbour taking photos and soaking it all in. 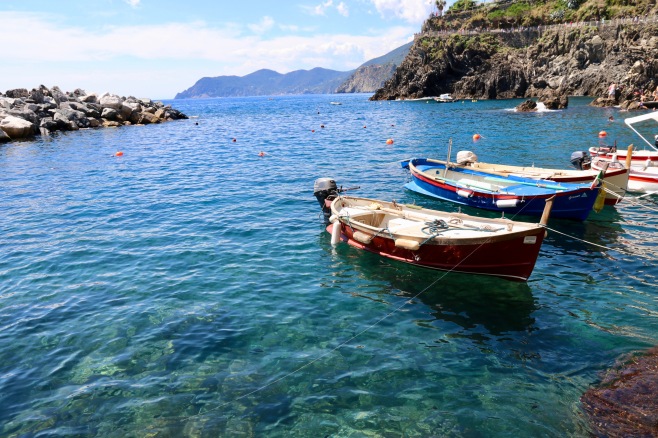 People jumping off the rock

Fish swimming near a boat

View of the harbour

It was such a hot day though and the sun was beating down, we needed to get out of the sun for a while.

We found a restaurant (no bars around, so you can’t just get a drink). Phil was getting hungry by now (it was after 3) so he ordered an octopus and calamari fried. It was delicious along with some French fries. I wasn’t all that hungry so just ordered dessert – it was pears and chocolate wrapped in filo pastry. I shared Phil’s main meal and he had a little of my dessert. It was amazing!

We then headed back up into the town on the other side of the railway. There wasn’t a great deal to see or to shop. We noticed a lot more dogs out getting walked, including a French bulldog.

We found a spot to sit and watch the world go by, although in hindsight, we should have gone to Riomaggiore to explore there and then come back to Manarola for sunset. Although we had decided to explore Riomaggiore tomorrow. We relaxed and chatted waiting for the sun to go down. When the sun was lower, we walked up to the hill overlooking the town. It was after 6:30 by now and the sun was still beating down. We sat up on the hill for a while and chatted to other people there.

The sun was finally low enough to give us our sunset shots. Luckily, because we wanted to get the 8:30 train back to Vernazza. They only run on the hour at this time of day. Most of these were taken between 7:00 pm and 7:50 pm. The sun doesn’t set until after 9:00 pm. 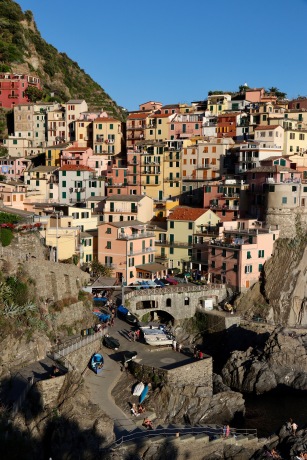 Close up of Manarola 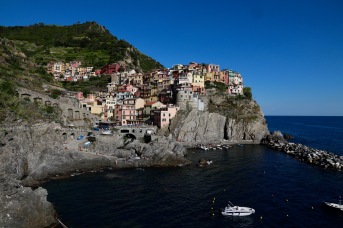 Manarola in the late afternoon sun 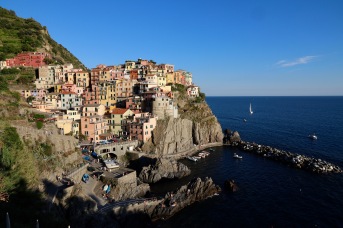 Manarola in the late afternoon sun

We were happy with these photos and glad we stuck around for this time to take them. As we were racing to the train station, we took some on the way.

We got off at Vernazza and finished the night with a gelato. Phil had passionfruit yoghurt and chocolate. I had a passionfruit flavoured gelato. Early to bed tonight and getting the blog up to date.