We had a late start today – thankfully as we needed a sleep in. We got up and had breakfast at a buffet in Moderno. We all had an omelette – cooked to order with your choice of fillings. Totally fabulous. There were other hot and cold options too. It was a great start to the day.

Kim opted to have a snooze, so Phil and I headed down onto some tables and chairs on the deck to try to catch up the blog and download our photos from yesterday. We ended up chatting to another friendly American.

There was a presentation of the History of Faberge that I attended. It was really informative and will be great for when we go to the Faberge museum in St Petersburg.

Phil and I had lunch together at O’Sheehans Bar and Grill – another complimentary option. He had fish and chips, I had fajitas. We decided to get the blog updated to today and relax. 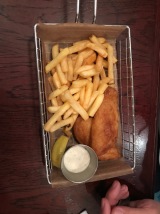 We had an early show of Burn the Floor, which is a dance spectacular with its roots in ballroom dancing. They had a live band and two singers, who were spectacular. The dancers were extraordinary. The whole show was super energetic and just amazing. We then headed up to the Syd Norman Pour House – but the Beatles tribute was cancelled due to the singer being ill. The normal band we see did an extra set to compensate. We were really tired and I was a little peckish, so we headed to the garden café to get something to eat. We then went to bed and had an early night, which was needed. Helsinki tomorrow.