We met Charlotte, our guide at the office along with a lovely couple from Great Britain. She asked if we were desperate to get to the Palace for the changing of the guard – which we weren’t and neither were the other couple. We had a great time on this tour as Charlotte explained how people lived and also took us to the sites away from the usual tourist traffic, so we got to see more of the real Copenhagen.

We went across the road from our hotel to the Town Hall where there were many brides arriving to get married. After Charlotte explained some more things, we headed across the road. Here she started talking to a mum and started telling us about maternity leave in Copenhagen. Child care is government funded as are university fees. However tax is incredibly high with the lowest wage earners paying 39% tax. Even people on unemployment benefits pay tax. This combined with the goods and services tax of 25% make it very expensive to live there. 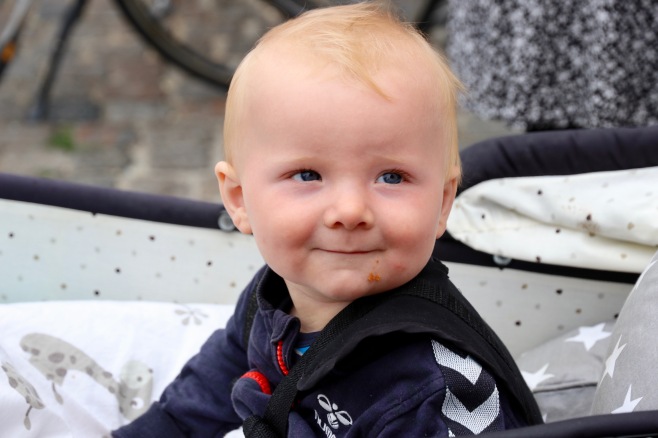 One other thing that has been pointed out regularly is that Copenhagen is working hard to be carbon neutral by 2025. To that end all roads have dedicated bicycle lanes and all of the trains have carriages that the bikes can go into. When you buy any bottle of drink, when you recycle it, you earn some money back off your next purchase. There is a recycling facility across the water from Copenhagen where waste is burnt. During this process water is heated for power and then that warm water is sent to homes to heat the homes using this super hot water. All of the Danish people that we met were on board to work towards achieving this goal. It is really fascinating.

After the encounter with the lady and her baby by the side of the road, we then went down St Peter’s Street (not it’s Danish name by the way – the English translation). This is an older area with a lot of residential homes. We were heading towards the ‘Latin Quarter’ as determined by Charlotte. As we were walking Charlotte stopped and started talking to an older lady who was watering the roses out the front of her house. Charlotte asked if we could see the private garden that belonged to the block of units and she invited us in. It was so beautiful to find this pretty oasis in the heart of one of Europe’s bustling cities.

Some of the buildings overlooking the gardens

After here, we headed down towards the German church after Charlotte had shouted us a taste of a special treat – a particular Danish pastry that I can’t remember the name of. It was mouthwateringly amazing. 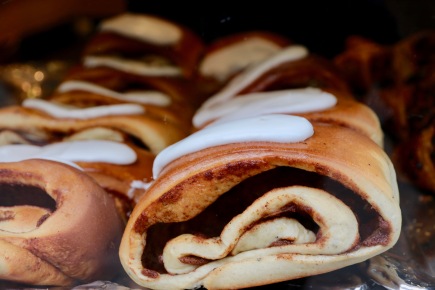 The pastries we shared Before they were cut up in the shop window 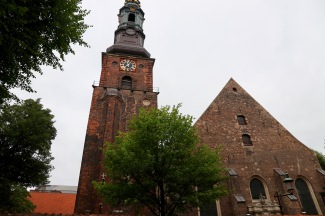 We wandered through alleys and came out at the old University of Copenhagen buildings, where scholars used to learn Latin – hence Charlotte’s nickname of the ‘Latin Quarter’. The University has all but moved to an area out near the airport with only the administration still housed in the centre of Copenhagen. Two of her children have already attended the University here and her third child is still in high school.

The old buildings of the university are so pretty. She took us to an area where the library used to be. She pointed out the drains where the water comes through the dog’s heads into other gutters. Luckily for us, the day was beautiful so we didn’t get to see the gutters working.

Courtyard near the old University of Copenhagen buildings The old library building for the University of Copenhagen

The Round Tower Copenhagen

As we were walking past the Jewish synagogue, there were police stationed outside. Charlotte explained that there had been a terrorist who tried to attack an outspoken writer and had then gone to this Jewish synagogue to attack the worshipping population. A guard on duty had been killed by this man. The police arrived and killed the terrorist. The terrorist had been born in Copenhagen to parents who were from overseas. Ever since then there has been either police or military guards on duty there.

Charlotte had explained at the beginning of the day that most Danish people don’t care about your partner choices so long as you are a nice person and you obey the law. They are quite open about discussing anything and everything.

As we were walking around we went into this courtyard which was built in 1733! The floor through the building (into the courtyard) was made of wood because that was better for the horses! It was so pretty. The buildings in this part of Copenhagen looked quite old (which they were), but so beautiful. 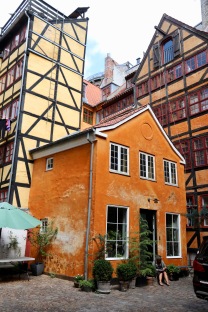 Driveway through to the street – note the wood panels – Copenhagen

After here, we found ourselves on the main tourist pedestrian shopping streets. Although we didn’t stay on it for long, instead veering off to walk on a parallel street. We found the main theatre building with so much detail. Walking further along we found ourselves back at Nyhavn (New Harbour) with the coloured houses overlooking the water.

A square found in Copenhagen

Grounds of a church in Copenhagen

We continued on to the Amalienborg Palace, although we had missed the changing of the guard by several hours. The palace guards were on duty though and we did see the change over of these guards. Charlotte was explaining different things to us about the Royal Family. 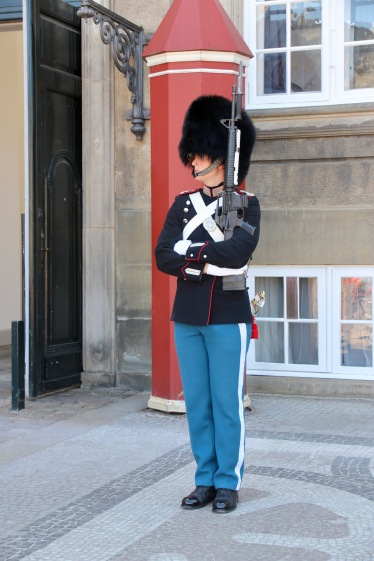 Our tour ended there, although Charlotte and the British couple were going for a coffee. We needed to have some lunch though and so we headed back to Nyhavn to get our lunch. We tried a different restaurant to the one that we had tried a couple of days ago. We really enjoyed our tour with Charlotte and if you are planning on going to Copenhagen and want an insight into life in Copenhagen, I would highly recommend getting in touch with Red Badge Guides. Looking from the bridge onto Nyhavn – Copenhagen

Enjoying the gorgeous weather on the water

After lunch, we had decided to use our hop on hop off tickets and go on a canal tour around Copenhagen. It essentially covered the same route as the hop on / hop off boat – just with someone talking at the front, instead of having the same information on your headphones.

When we finished the tour, we walked back up the shopping street. We were looking for a very small souvenir for us. We checked out the Disney shop and were disappointed – it wasn’t as good as Dublin.

We got back to the hotel and relaxed in the lounge for a while and got some snacks. We packed our bags and had an exceptionally early night as we need to be up at 3:30 am for our flight to the airport in the morning.

We have both enjoyed Copenhagen and will hopefully be back here again in the future.