We had a very early start today. The bus was picking us up at 6:00am!! Talk about crazy! Anyway we were up and out by 5:45am so we could go to McDonalds to get coffee and breakfast. Steve (our driver) was explaining what would happen when we got there. We only had 8 people on the bus so that was a nice size. One family was from Southern California and the other couple were honeymooners from Toronto. We headed to Pearl Harbour and were in the security checkpoint line at 645 am. It opens at 7:00 am. Steve was surprised at how short the line was. Phil suspected it was because the memorial is closed at the moment. (We probably wouldn’t have come if we hadn’t already booked and paid for the tour).

We got into the complex and found out that our time to see the movie (the information provided before the tour) was at 8:30 am. We went out and explored the museum and the other information on site. We were also there for the raising of the flag at 8:00am when they played the Star Spangled Banner – the American national anthem. 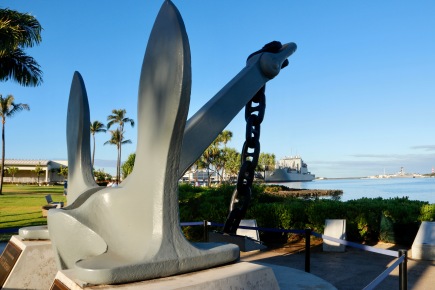 The anchor recovered from the Arizona

Ships at the naval dockyards

The information provided and the film certainly set the scene for that fateful day on Sunday December 7th 1941 at 7:48am. We travelled out by boat to the area where the Arizona lay beneath the surface, but couldn’t get close to the sunken ship. We could see some of the wreckage above the surface. It is devastating to imagine the horrific scene here in this beautifully peaceful place. 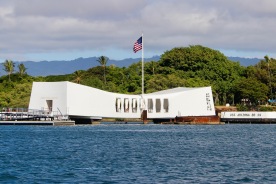 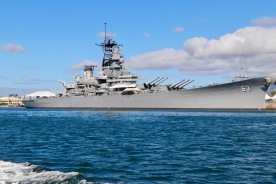 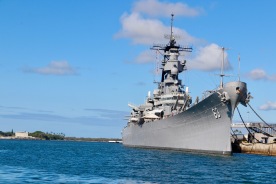 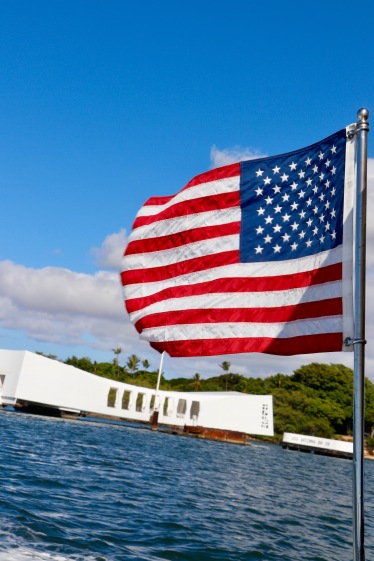 The Arizona Memorial with some of the wreckage above the water

After this, we went back on the bus to go across to Ford Island to see the retired battleship Missouri. We did a free guided tour which was fascinating. It was starting to heat up and ships aren’t really my thing so Phil went off exploring. He was working at Garden Island in 1986 when the Missouri visited for the 75th Anniversary of the Royal Australian Navy. He was very happy to go and explore. 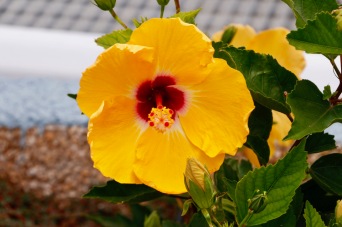 Hibiscus at the gate 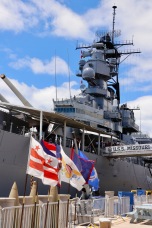 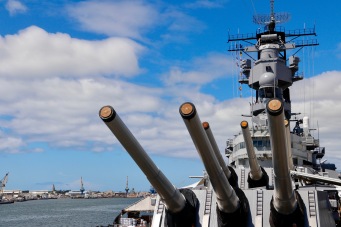 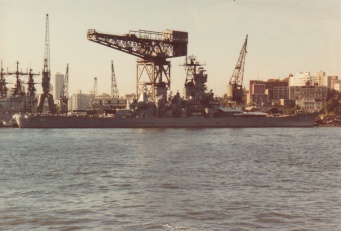 The Missouri in Sydney in 1986 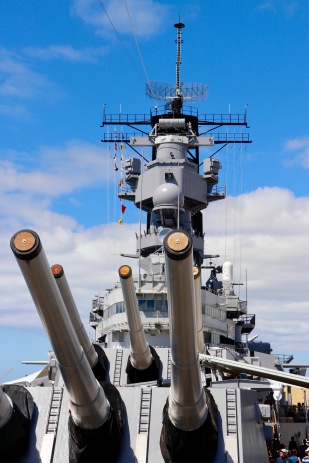 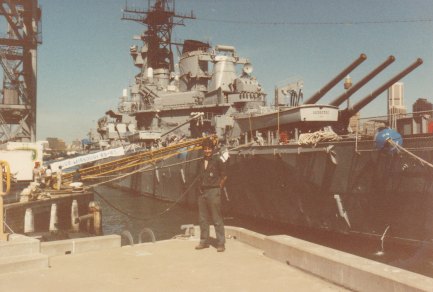 Phil outside the Missouri in Sydney in 86 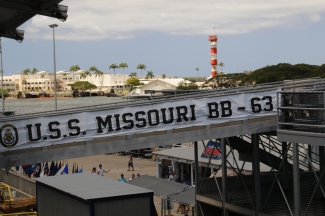 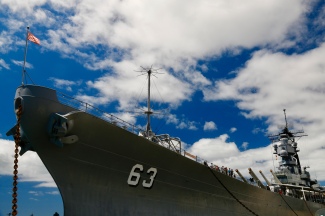 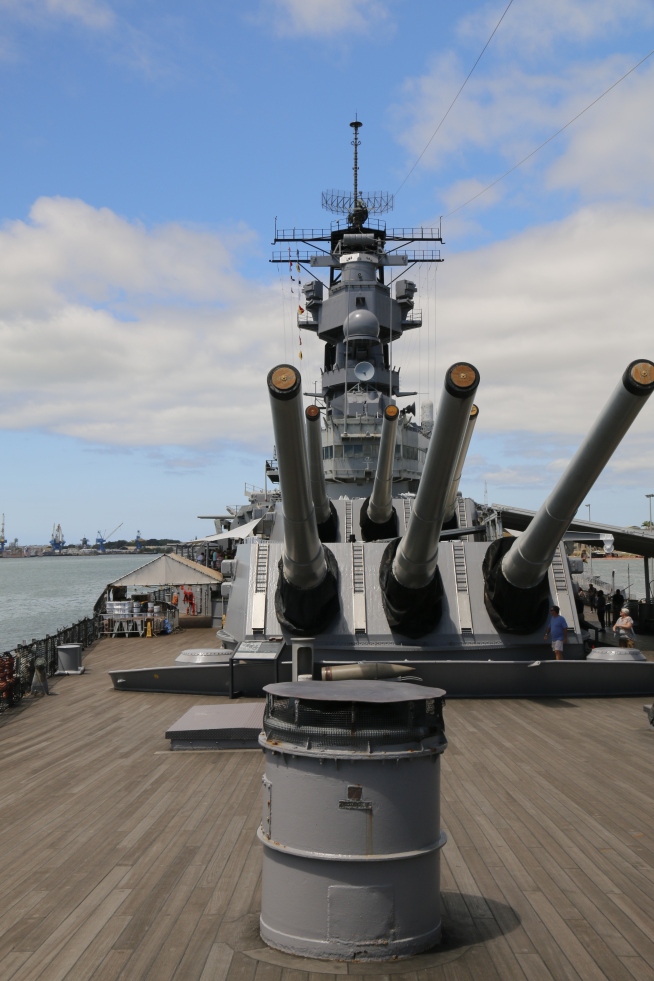 After here, we headed back through Honolulu’s financial and commercial district to get back to the hotel. We headed down to the pool bar for lunch. It was lovely, although a little pricey. 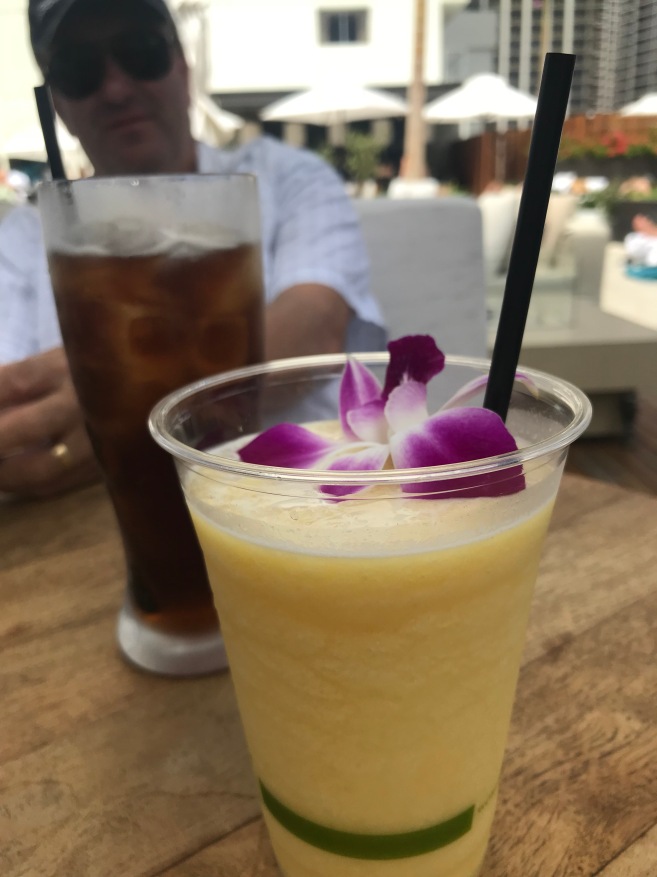 We headed down to the International Market Place for some shopping. Phil was looking for a Hawaiian shirt and I wanted some hair decorations. We got them and the got the boys some shirts as well. (Not Hawaiian shirts though – we don’t think they would like them or wear them). We had another smoothie of pineapple and watermelon. These drinks are so refreshing and filling.

We headed back to our hotel and Phil fell asleep really early again. I caught up on the blog and relaxed as well.

We are off to a Luau tomorrow afternoon – our final night of our Grand Adventure. Tomorrow is the last day of our holiday as we are getting picked up for our flight home at 6:15 am on Monday morning.