We were up and out early this morning. Phil and I wanted to go to the Fushimi Inari Shrine before it was super crowded. We had initially (or rather I had initially) thought about getting up at 6 am to go, but that wasn’t going to happen. We got up at 6:45am, got changed and left. We went across the road to the station and jumped into a cab. There was a section for foreign tourists, where the cab drivers spoke basic English. The driver took us to the shrine. It was so beautiful seeing Kyoto in the early morning and it was sunny to boot.

The Tori Gates looking away from the Shrine towards the station We arrived there about 7:20 am and there was a steady stream of people already there and arriving. Seeing the Tori gate across the road from the station was amazing. We walked through and couldn’t believe we were actually there. We took some quick photos around the shrine area and then headed up into the hills behind the shrine, where the hundreds of tori gates are across the mountain. They look so beautiful and, at that time of the day, it was so peaceful with the morning light filtering through. Bliss! We soaked it all in, especially the peace and quiet. It truly was quite spiritual.

We headed up the mountain seeking some great photos, which was why we had gotten up so early. We have booked a tour tomorrow that visits this site, so we will get to see it at a different time of day as well. We experimented with some different photos from different points along the way. We had lots of fun. After we had finished on the mountain, we headed back to the Shrine, which was much busier now. We took some photos of the stunning cherry blossoms and other things which caught our attention. 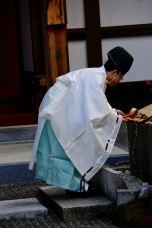 We headed back to the hotel for breakfast. We caught the train back to Kyoto station now that we weren’t pressed for time. I had initially thought about getting to Kinkakuju Temple at 9:00am, however due to our later start at the gates, we knew that we weren’t going to be able to do that. We had breakfast and got organised. Dallas was awake and ready to go to Kinkakuju Temple (the golden Pavilion). Phil and I went across the road to another foreign friendly cab driver, who picked up Dallas on the way. He was telling us about his memories of the 1964 Tokyo Olympics and Murray Rose’s incredible swims, relying on Google translate most of the time. He was a lovely man. He asked us to say hello to Hugh Jackman and Mel Gibson when we saw them next.

We went into the Temple grounds and were amazed at how beautiful they were. We got our ticket and rounded the corner. Our first view of this beautiful golden temple was amazing. Seeing it in real life, after seeing so many photos of it was just breathtaking. All of us were just drinking in the view and the serenity. It was crowded, but people were being considerate. Unfortunately, the breeze had starting picking up, so we weren’t able to get the photos with the reflection that I had wanted, which means we will have to come back.

We stopped at one of the shrines, lit a candle for family harmony and placed some incense in front of the shrine. 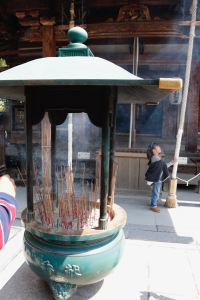 A shrine at Kinkakuji Temple, Kyoto

Our candle for family harmony at a shrine at Kinkakuji Temple, Kyoto

We continued through the gardens and were amazed at how beautiful the whole garden was. Our friendly cab driver had recommended we stop and see the Ninnaji Temple due to the beautiful cherry blossoms. We took his recommendation and stopped in on our through to the Bamboo Grove at Arashiyama. We hailed another cab and went to Ninnaji Temple. Even though the cherry blossoms peak was well over, they were still so pretty. Due to time restraints we only got the ticket for the gardens and not the temple as well. We were glad we stopped here (as it was on the way through to the next stop). 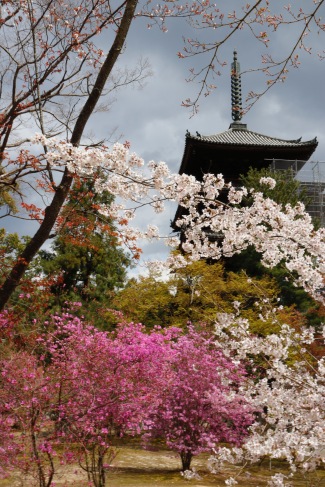 We found another cab to take us to Arashiyama. We couldn’t believe how busy this area was, and how beautiful too. The driver dropped us off as close to the bamboo grove as he could and we found our way into there. It was so tall. Phil loves the bamboo we have growing at home around the pool. Even he was shocked at how tall it was.  We decided to explore a little further and discovered a beautiful little town. 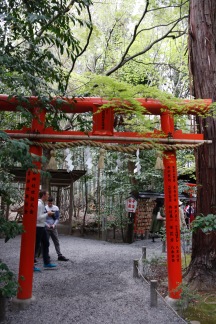 We found the train station and caught a local train back into Kyoto. Phil and I had our dinner booked with a geisha and maiko tonight, so we needed to get ready for that. We had booked this experience as we wanted to get some photographs of either a geisha or maiko (an apprentice geisha) and this experience was a splurge for us. The food was presented so beautifully and was traditional Japanese. 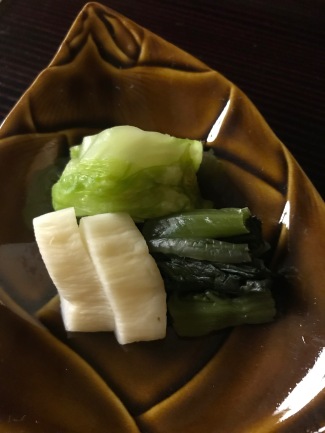 Vegetables for the soup 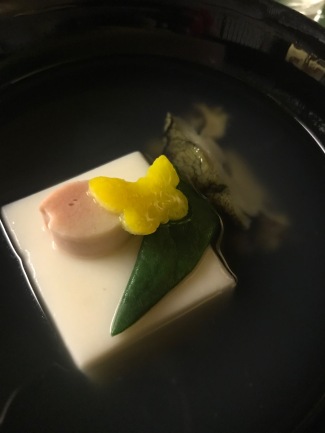 One of the highlights was being able to watch the geisha and maiko present their dances. The girls become highly skilled in traditional dances, playing musical instruments and being able to be the ‘life of the party’. The geisha prompted the maiko in different ways to teach her the correct way to do things.

The geisha performing her dance.

The geisha performing her dance.

The other highlight was when the girls went around the room, with an English interpreter, and we could ask them any questions that we wanted to. The maiko came to our table. We learnt that she was only 16. She had already stopped her formal school and was studying the arts required for her to become a geisha. She had visited Kyoto and had decided that she would like to be a geisha. Her parents are far away so she doesn’t get to see them that often. She has the freedom to stop being a geisha, if she so chooses, whenever she would like. She is unable to marry whilst being a geisha. She is happy with her life and really enjoys her work. She was quite animated when talking to us and was lovely to listen to. The maiko when talking to our table,

I played a game with the geisha, and unfortunately lost, so had to have a small amount of beer. The geisha and maiko together We are both very pleased that we had this experience. If you are interested the link for place we went to is here. After dinner, we went for another walk through Gion and experimented with more photos,

Crane alongside the canal in Pontocho, Kyoto

Another massive, jam-packed day but I’m so glad we were able to see so many of the places that I had wanted to see, and thanks to using the taxis we didn’t feel rushed at all. We could go at our own pace. We are absolutely loving this city,