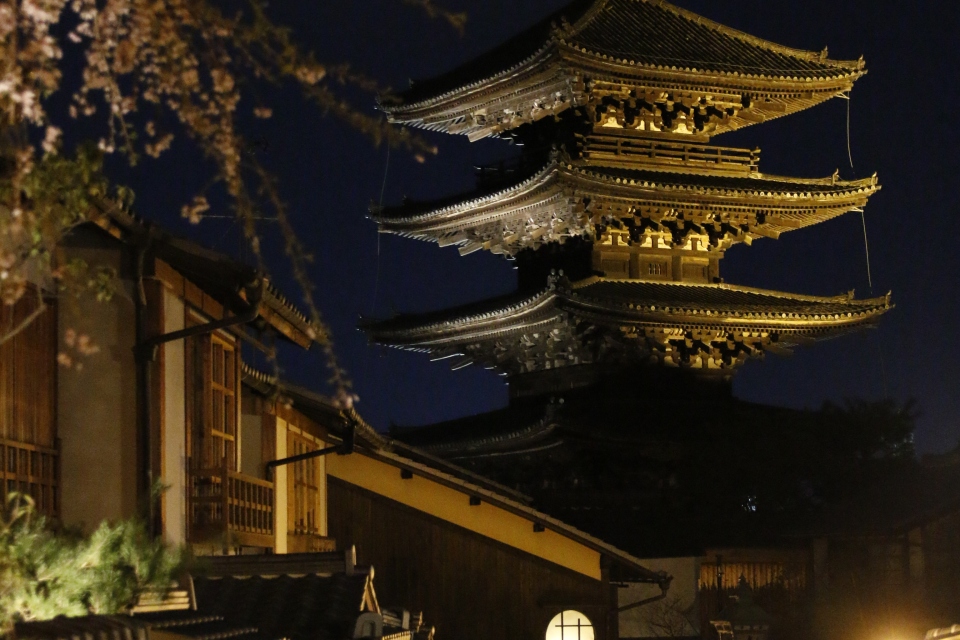 Today we had three objectives – find a Japanese doll in a traditional kimono for me, a sword for Ryan and go to the tour that we had booked through Intrepid Travel Urban Adventures. We asked at reception where to go, and they suggested Bic Camera and another shop in Gion. We went to Bic Camera first and they didn’t have anything at all, even after we looked in every possible department. We caught a cab to Gion and went to the shop that was suggested by the hotel. Whilst we saw some geishas when we were driving through Gion, the shop really didn’t have anything. There was a shop that had been suggested in the book, but it was a fair distance away. We decided to give it a shot anyway. We jumped in another cab and went to the shop. We couldn’t believe how many tourists there were here. It was packed! We then realised that the shop was in a tourist area in a pedestrian street leading down from the Kiyomizu-dera Temple. It really was a very pretty area and I would have liked more time here, but unfortunately we were tight on time. There were a few shops that had replica samurai swords and Japanese dolls. It then became a difficult decision to find the ‘right’ one. There was a massive price difference – they started at around 2000 JPY to about 5000 JPY and then started at 20 000 JPY. The swords were also mind boggling with all of their different designs. We found one that we liked for Ryan and Phil decided that he wanted one too. We made our purchases and walked down to the bottom of the hill to hail a cab to get us back to our hotel. Phil raced across to the station’s 7/11 to get us some sandwiches before we met our tour group at 2pm near the station. We ate them, met Dallas and then headed over to the group.

It was so cold standing in the shadows waiting for everyone to arrive. Luckily we had warm jackets on. We headed off to get the train to our first stop. This was a JR train, so we used our JR Passes. Our first stop was a Zen Buddhist Temple called Tofukuji. It was so peaceful. Sean showed us around the different areas of the temple and gardens. He explained the meaning behind the different sections of the garden and how the garden designer was bringing in different elements to create meaning. On our way to this temple we saw some Ojizosan statues on the way there. This is the deity who will help children have a safe passage after they have passed away. It can also be to ask the deity to look after the children here on earth as well.

From Tofukuji Temple, we walked through some local neighbourhoods to arrive at the Fushimi Inari Shrine. It was packed. Sean, our amazing tour guide, explained to us the difference between the two temples. He also taught us how to pray at this shrine. It’s very different and loud as you need to ring the bell. It was so noisy, nothing like the peaceful prayer time that we had witnessed first thing in the morning, We joined the crowds thronging up the mountain side to the Tori Gates. Dallas couldn’t believe how beautiful it looked. I think that he kind of regrets not coming with us early in the morning, especially when he found out you could go all the way to the top. He can do that on his next trip to Kyoto. Dallas has also fallen under this city’s spell. Sean decided to take us the wrong way, so we went up the down path and back through the gates, as we had a better chance of getting some great photos without thousands of people in them, which everyone was so grateful for. After we had finished at the shrine he gave us about 15 minutes in case anyone wanted to get something to eat or use the restrooms. Dallas and Phil were starving so we headed to this area where there were street stalls selling all different kinds of food. Dallas and Phil got some meat sticks and Dallas also bought some fried chicken. We headed for a different train station than the one that we had caught back to Kyoto, that would take us to Gion.

One of the foxes guarding the Fushimi Inari Shrine, Kyoto

The tori gates behind the Fushimi Inari Shrine, Kyoto

The tori gates behind the Fushimi Inari Shrine, Kyoto

Sean had bought some traditional Japanese sweets for us to try – Yatsuhashi. It was like uncooked pastry with some jam in the middle. I love uncooked pastry, so this was beautiful to me. Dallas liked it as much as I did and Phil thought it was ok. Sean had bought a pack with some different flavours, which he willingly shared around with the group.

When we got out of the train we were walking down the main street leading into Gion (which we had gone down before). Sean pointed out to us the shop where you can buy the sweets from. I made a mental note as I definitely want to get some. We walked through Gion, along some canals with stunning cherry blossoms. It really was so stunning. Sean pointed out some recommendations for restaurants for people who were staying longer. 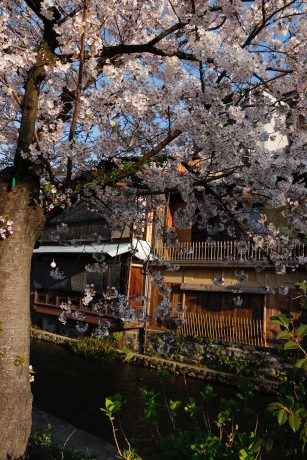 We crossed into the another geisha district in Gion as Sean started explaining more information about the girls who are trained in traditional dance and musical instruments. He explained the difference between geishas and maikos. As we were walking around we saw some go hurrying past. They hurry as they are trying to get to their next appointment as they don’t want to be late. This part of the tour ended here and we had a break before the next half of the tour began. We walked around Gion and managed to see some more geisha and maiko before going to buy some sweets.

Different flavours of snack that we tried called Yatsuhashi. Clockwise from the top are chocolate, chocolate banana, mint choc chip, strawberry and lemon.

Maiko – check out her shoes

We met for the next section of the tour. This time we were staying around Gion. Our first stop was Gion Kobu, one of the five Geisha districts in Kyoto. Our next stop was the shrine of Emperor Sutoku (Yasui Konpiragu), which is where you go to cut bonds. 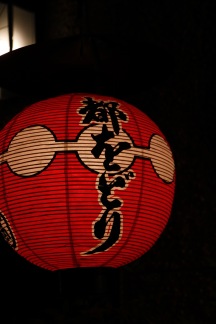 The lanterns of Gion

Outside the shrine of Emperor Sutoku

The shrine of Emperor Sutoku – the place you go to cut bonds.

After here we headed to the Higashi Yama district. We saw the Yasaka Pagoda from two vantage points. It was so beautiful. We had a stop near the Yasaka Pagoda to have a drink and some ice cream. Sean filled us in on more information about Kyoto and this area. We headed away from the pagoda and Sean told us to turn around. This scene was breathtaking! It was so beautiful and even more amazingly, there was hardly anyone around. 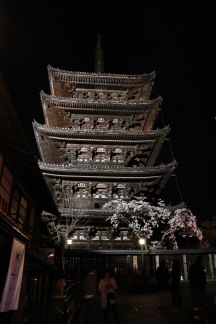 The stairs continued around to the Kiomizu Temple.

We headed down these beautiful old streets that were so stunning and peaceful. The lane was called Ninenzaka. It was here that I realised that Phil did NOT have my shopping, that he had volunteered to carry – my sweets, glass case and coin purse that I had bought. He must have put it down when we stopped to buy the drinks and the ice cream. Dallas and Phil had decided to have a quick bite to eat as they were so hungry at the Food Mart. Clearly, Phil had put it down and forgotten about it, Luckily, Sean came to the rescue and volunteered to run back down to the shop to see if it was still there. We waited in the beautiful street. The other family’s grandmother ended up buying an umbrella while we were waiting.

Stunning streets between the Yasaka Pagoda called Ninenzaka (I think) and the Yasaka Shrine, Kyoto

Sean returned victorious. Luckily it is here in Japan that he lost it. Everyone is so honest here and things get handed in. The shopkeepers had it. Just an excellent example of how amazing our tour guide was. We came to the Kodaji Temple built for Hideyoshi by his wife. The cherry blossoms at this temple were divine.

We had moved into the Higashiyama District where we went to the Yasaka Shrine. After another wander through here (we had been here each night we were in Kyoto), we headed to a place called Osho where we ate gyoza with the group. They were amazing.

Gorgeous quiet alleyways that we wandered down on our way around Gion, Kyoto

Gyoza from Osho in Gion, Kyoto

We then headed back to the canal area and went to a bar called Golden, which is located on Kiyamachi. Sean encouraged us to try different Japanese drinks. Bel had some plum wine, whilst Dallas and Phil tried three calpis cocktails (I’m not sure of the spelling) in different flavours – lime, lemon and another flavour. They both slept well that night.

Calpis cocktail (not sure of the spelling), Kyoto 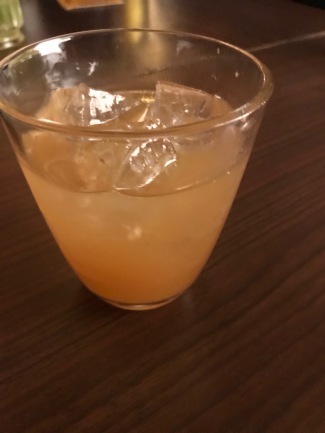 We farewelled Sean at the bar. Phil and I got a cab back to our hotel and Dallas walked back to his hostel. We have had a great time here in Kyoto. It is such a beautiful city with lots of history and stunning views.