We left Megan and Paul’s this morning and went to Dublin airport. We were starting our journey home with a stopover in Zurich, Switzerland. We don’t have very long here, just a small taste really. We had been really lucky with airport personnel until this check in. She was a little rude and abrupt, which has been the opposite experience we have had up until now.

We arrived at our hotel in Zurich and I was feeling worse and worse. My throat had started to hurt in Dublin and it was just getting worse. I ended up having a sleep this afternoon so that we could go out and do our photo tour this evening. We met Chris, our photographer, who picked us up at the hotel and we drove down to the city centre. He took us to different locations around the river and the lake.

Zurich by the River Limmat. There were heaps of swans on the river and the water was so clear 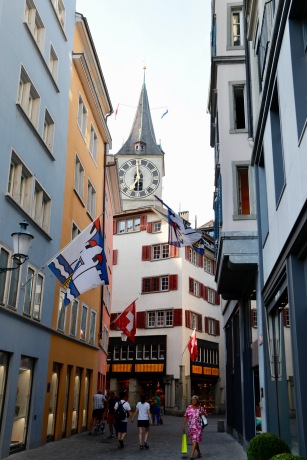 We took some beautiful photographs, but I wasn’t at my best. We had only organised a short tour in this location, and as it turns out, it was great due to me not being well. Chris was very kind and thoughtful in terms of me not being well. We experimented with some different kinds of photographs. 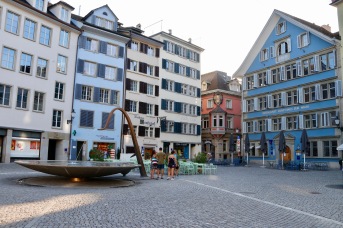 Statue in Zurich near the banking area

View by the River Limmat

View by the River Limmat in Zurich

Sunset in Zurich by the River Limmat 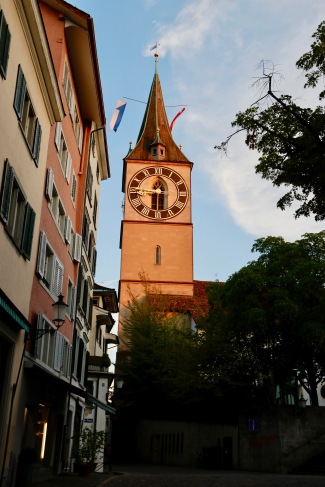 Setting sun on one of the clocks in Zurich 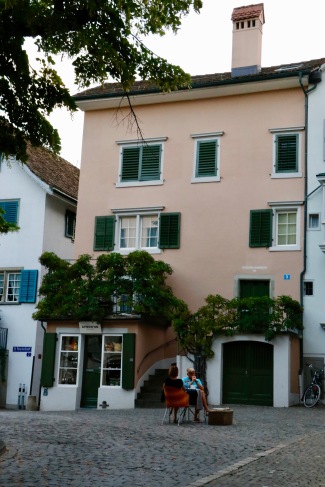 Enjoying the peace and quiet of a summer evening in Zurich

Sunset over the River Limmat

Sunset over the River Limmat in Zurich

Zurich Lake with the Swiss Alps in the background

Swan on the river at sunset

Roller bladers – there must have been over a hundred people roller blading.

A beautiful Swiss alleyway in Zurich

We found a restaurant for dinner. It was in a beautiful location but was pricey. (We had been warned that Switzerland was expensive). My chicken was 24CHF which I thought was ok. Phil tried the white sausage. It was one sausage and French fries also for 24CHF which is THE most expensive sausage he has ever had! The exchange makes his sausage and fries to $32.64 AUD. It was delicious, but pricey.

As we were walking to get a cab there were hundreds of rollerbladers going past. It was still quite hot at 10:30. It was so cool. They had Police escorts. We got a cab up the hill (luckily there was no way I could have walked UP that hill). Sadly, our hotel had no air conditioning (as it isn’t usually this hot in Zurich).

We are off to Montreal tomorrow.