Well after an amazing sleep and sleep in, we had a beautiful breakfast cooked by Paul today. We decided to head in to Dublin and explore some more, now that we weren’t affected by jet lag. We headed off to walk through St Stephen’s Green, which again was filled with people enjoying the beautiful warm temperatures and sunny weather. Today the temperature was 21 degrees Celsius, although it felt much warmer in the sunshine.

We headed into the shopping area where Phil got a sim for his mobile and I checked out the Disney store. We had decided to go on the Hop On Hop Off bus and luckily, the next bus was due in 5 minutes, so we jumped on. Phil always likes sitting at the top of these buses, in the open air, luckily it was such a nice day. We went on the red route and got to see more of Dublin, including the Liffey River.

Phil is very interested in the history of Dublin and Ireland, especially the uprising in 1916, where the Irish declared their independence from England. After going around the red route and seeing the Guinness area, the Dublin Castle, St Patrick’s Cathedral, Phoenix Park, South Dublin, Trinity College and Kilmainham Gaol, we were able to decide which attractions to go back to tomorrow. The Dublin Castle, Guinness Storehouse, Walking Tour and Kilmainham Gaol. We’d also like to go on the blue route, which goes further out of Dublin.

After doing the loop on the bus, we headed up Grafton Street, which is a shopping area and closed to traffic, to get some lunch. (It was after 2:00 pm by this time). We found a cafe called Bewley’s which had some seats overlooking the street in their upstairs dining area. We ordered a croque monsieur each and some scones. After our late lunch, we went shopping because I wanted to get a lightweight cardigan. We went into Marks and Spencers and found what I was looking for.

We had a look in some souvenir shops and were trying to decide what to get. Still thinking about it though. We headed home to Megan and Paul’s as we are having another beautiful dinner there tonight. Phil got the drone out and took some photos of Megan’s neighbourhood. A great day out in Dublin, finishing off with a lovely meal with family. A brilliant day! 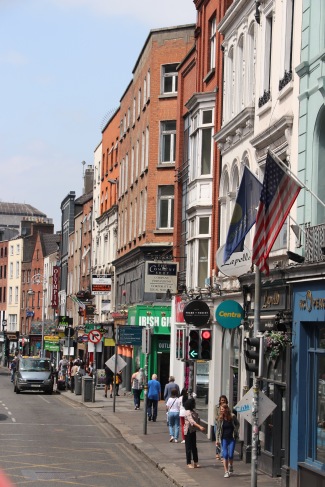 Photo from the Bus Tour

One of the cathedral’s (St Patrick’s I think)

View of North Dublin and the River Liffey

The Ha’penny bridge across the River Liffey

Photo from the bus tour

One Response to “Ireland – Dublin”