So, after a good night’s sleep, we headed down to breakfast. This was certainly NOT good! The eggs were like rubber. We packed up and headed to the airport early. Due to the issues yesterday, we had been booked into first class seats today, so got to use the sky priority line at the airport. This was a definite plus!

We went through security again – using the priority line. We had a lovely breakfast at the airport and went to the gate. At this point in time, our flight status is ‘on time’. The plane has arrived from wherever it has been and we are crossing our fingers that our flight to JFK goes on time without a hitch.

We arrived in JFK, got our bags really quickly (thanks for the upgrade to first class Delta) and found a cab. We got to our Air BnB and finally got to meet our wonderful hosts – Carol and Marc. By this stage it was 1:00pm. We chatted for a while, got organised and headed to the 9/11 memorial and World Trade area.

We caught another yellow taxi over there as we wanted to get there as quickly as possible. The cab driver was friendly and dropped us off at the edge of the plaza. We were both pretty hungry by this stage and there was a street vendor right there. Phil had a hot dog and I had a pretzel along with some water and Diet Coke. First lesson learned here was not to buy anything without asking the price first. We were ripped off. However, we did learn not to buy off a vendor that didn’t have the prices listed. 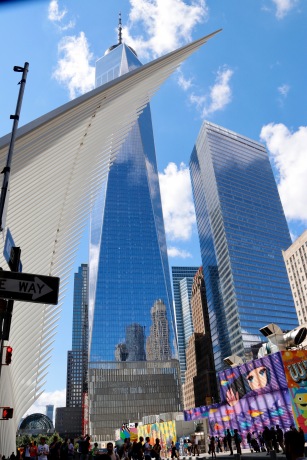 Westfields and One World Centre 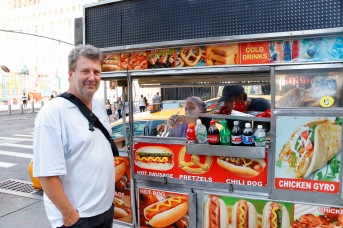 Phil at the hot dog stand We quickly ate and then headed to the 9/11 Museum and memorial. The memorial (where the towers once stood) with the water cascading down was peaceful and beautiful. Seeing all the names around the outside of these fountains really highlighted how many people lost their lives from that day. We went inside and upgraded to have a guided tour.  Our tour started at 4:30 (it was just after 4:00) so we waited. Our tour guide was quite informative and showed us different highlights of the museum.

The outside steel structure at the point of impact

One of the artefacts that caught our attention was the piece of steel that was above where one of the planes went into the tower. It was twisted like paper highlighting the impact of the force and the subsequent heat from the fires. After the guided tour, we went into the section that had the timeline of events and more artefacts. Whilst I remember the events of that day clearly, seeing it all again whilst we were brought all of the emotions back.

Reading about the timelines and the responses of emergency workers was amazing. One of the things that I learnt was that the people who went to help on that day are suffering from the emotional toll (and the ones that for whatever reasons weren’t there that should have been there), but many have since contracted cancer, due to the amount of debris in the air (they believe). The people who have since died as a direct result of being there are also remembered within the memorial.

This is a place that you should visit if you are in New York. It is a place of remembrance and reflection. It is a place that guarantees that the innocent people who died that day, won’t be forgotten. We found the Survivor Tree. This Callery Pear tree was discovered as people were cleaning up the debris. It’s bark was burned and it was damaged. It was moved to a local nursery, where it was cared for and nursed back to life. Once it was well, and the memorial was complete it was returned to the memorial as a symbol of resilience, survival and rebirth – The Survivor Tree.

Squirrel hanging in the park

Same squirrel – it wanted to be a model Some of the thousands of names

The pools of water

Some of the names

A white rose is placed on the victim’s names on their birthday.

After we finished in the Museum we decided to go up to the One World Observatory. Phil was handed a card that gave us discounted tickets to priority access so we could skip the lines. We did this, due to missing one day of our time in New York, as time was a limited commodity.

We went up to the observation area and were amazed. We were up so high with such a great view of the city. It is massive. It was a great way to end the day, watching the sunset from the observation deck of the One World Tower.

The view from the top looking over midtown 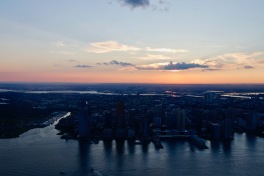 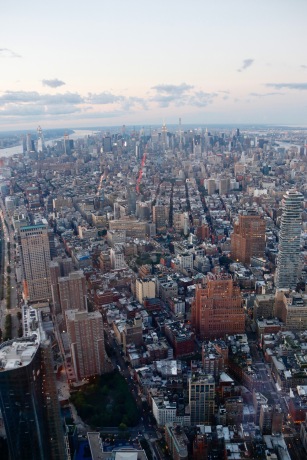 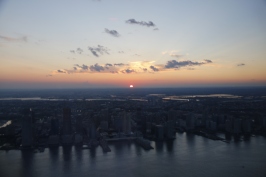 We headed back down, took some more photos of the area and got a taxi back to near where we were staying for dinner. We ended up at a restaurant that Carol and Marc had recommended for our first night in town – Dudley’s. The food was good. We both had schnitzel with creamed corn and steamed vegetables. We walked back to the apartment from there. Marc was arriving at the same time we were there, so we chatted to him for a while. We had a great conversation and it was interesting to hear about life in New York.